My second Whole30 has been completely different than my first.  As I didn't go back to SAD eating in July, I didn't have nearly the detox symptoms so it was a much happier month! However, I didn't do well at sticking to The Plate for every single meal (or even most meals!) and I think that kept me from feeling as good as I did at the end of my first Whole30.  I also ate a lot more fruit this time around (I hardly ate any last time) because of the readily available seasonal yumminess, but I think that kept my Sugar Dragon alive.  =0(  I am continuing on for a Whole60 in September.

While the difference between the beginning of the month and the end of the month isn't readily seen in these pics, there are some differences if you look closely.  If you take a look at the pics from May 31, 2013 on the My Journey (Thus Far) tab you can see some further differences - namely in my face and how much my stomach hangs over in the side pictures. 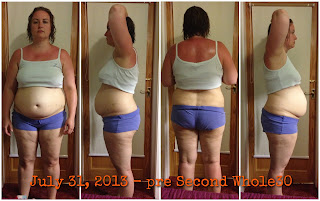 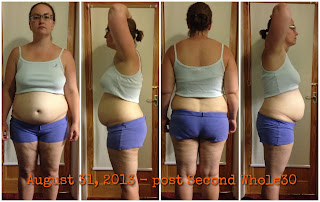 Some Food Highlights From the Month: 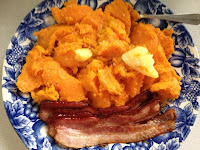 "Christina's Regular"! Sweet potato/s with ghee and salt and bacon tend to be my breakfast most mornings.  If I don't have my sweet potato in the morning, I tend to feel it later in the day as I begin to drag. 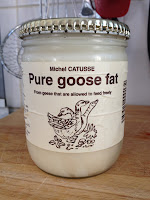 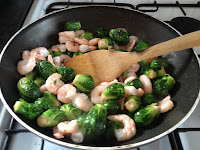 Shrimp and brussel sprouts sauteed in goose fat.  Not one of my favourite meals of the month.  I'm not sure if it was the combination or the fat - I've never cooked with goose fat before. 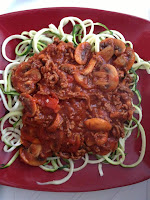 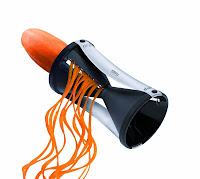 Spaghetti bolognaise with zoodles! My homemade spaghetti sauce includes passata, tomato paste, chopped tomatoes, garlic, onions, mushrooms, spices and mince or Italian sausage. I used this cool appliance for the first time and the zoodles (zuchinni noodles) turned out pretty great! I'm not sure I could tell that it wasn't real noodles under there. 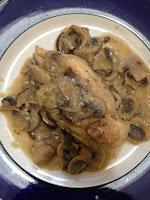 I remade this Coconut Ginger Mushroom Chicken from PaleOMG that I made last month with my best friend on our girlie weekend away.  Still yummy! 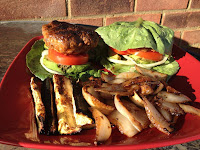 Naked burgers with sweet onions, lettuce, tomatoes and avocados.  Accompanied by grilled zucchini and sweet onions.  I love veggies that my hubby grills (maybe because I'm not cooking them?!). 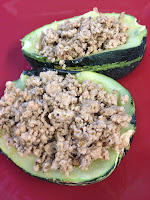 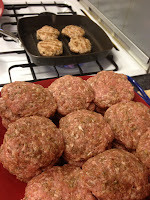 Homemade sweet Italian sausage (seasoning from The Whole Gang) in squash.  I also used the seasoning to make breakfast sausages. 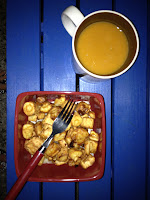 Butternut squash soup (from Primal Palate) and roasted parsnip rounds that I did in my ActiFry with ghee - best way to eat parsnips by far!  A bit of fall in the air that night! 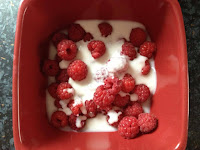 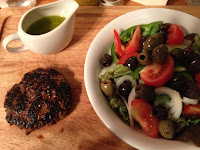 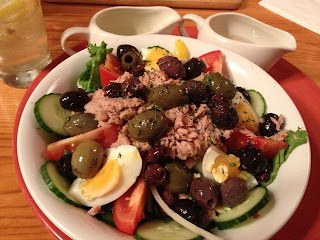 My kiddos were gone two weeks of this month so the hubby and I ate out several times.  I find it boring to eat out - it's not hard to get food that is compliant, but it doesn't usually taste that great! But, twice this month we went to Paolo's Kitchen and had a fab salad both times. 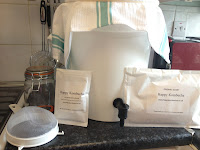 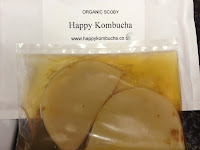 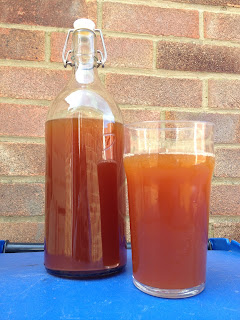 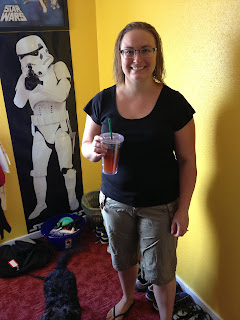 Posted by Practicing Primal at 3:55 pm

Thank you for taking the time to read Practicing Primal today. I am so excited to share my journey with you. Feel free to leave comments (I love them!).... Change the "Comment As" box to show who you are OR just sign your name on your post!

Practicing Primal
Hiya! I'm Christina... just an ex-pat American girl living in Britain with a new hubby & inherited children; trying to become a domestic diva, super scrimper & whole food health nut (not sure how I'm doing on any of those!). Currently, I'm attempting to put the Primal/Paleo lifestyle into practice in the real world. This is my journey to (hopefully!) health and happiness starting at the beginning.